The retaining wall is done!

Here’s the same view today. The, um, “garage” was torn down and replaced by something structurally sound and able to hold two cars. The scrub trees that block your view in the top photo have been removed. (The big tree on the left in the top photo was diseased. Otherwise we would have kept it.)

Here’s a closeup of the top of the retaining wall. The dirt starts where the old wall ended. We filled in with screened topsoil so the root systems from the old trees that we cut down wouldn’t put pressure on the new wall.

The highest spot on the wall is about four feet. We’ve kept some slope down to the far end — otherwise we would have needed to make it six feet tall and that might be pushing our luck with these irregular pieces of concrete. 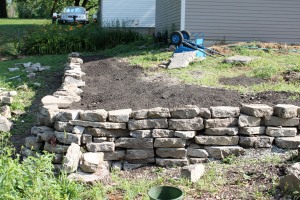 The old wall was just a straight line. We added this side, which runs about five feet, to make it look like a “L.” This photo was taken last week after it rained and the topsoil had settled a bit. We added another half-dozen wheelbarrow loads of topsoil over the weekend.

From June: What do building a wall and writing have in common?